This nearly ended up an every picture tells a story post – regardless of the lack of artistry in the photographs. The thing is, having had such a good day, I thought this would be an easy one to write, but I’ve sat down to do it two or three times now and ended up binning everything as either too heavy-handed or simply uninteresting. In fact I’m more than a little tempted to let the pictures do the work even now, but a big part of me feels that would be a weasel act, at odds with the spirit of the whole project.

The thing is, Mary’s bench is a major marker in the life cycle of Haddon Wood. There would be no wood without Mary and Gert and though Mary left us in April, her presence is very much with us all, particularly when we walk the fields of saplings and this was a happy, but undeniably emotional day. So, no pressure then…

Almost from the very first, Gert and his family had wanted something tangible within the site, to remember her by  – a place for contemplation perhaps – and for some time now, through all the plantings and mowings and rakings and seedings, the bench has been growing quietly in the background, under the skilful hands of Stewart Gould.

Then, on Friday 29th November, he was ready. It was installation day.

We’d had to jump through a couple of hoops first, of course: the Woodland Trust have a standard bench design that we all wanted to deviate from for various reasons, so permission had to be sought for an alternate design the family were happy with; plus WT regulations dictate that these things need to be sunk several feet into the ground, so someone would need to deal with that too. In addition Stewart had warned that the green oak made the structure very heavy and he would need extra muscle to help put it together on site, so we did the obvious thing – delegated Mark and Nick.  …and then some of us decided to go along on the day too, to give invaluable assistance, spurious advice and generally get in the way. Gert, of course, was there as of right.

We were lucky. Though cold, it was relatively bright and blessedly dry, so Mark was able to drive his pick-up almost to the site, with the precious cargo on board and towing a digger behind. We already had a rough idea of where the bench should go but, needless to say with such a garrulous lot, there had to be a certain amount of last minute debate: high enough to have a good view, while the trees are still small enough; backed by the comfort of a hedge but not too close to existing hedgerow trees that might fall etc etc, but fortunately Gert cut through the ordure and the final decision was taken.

Actually, from that point the pictures do tell the story of that day – except to say that the sunflower forms part of the design because it holds significance for the family and that I should have taken a picture after Gert back-filled the soil round the legs to bed it in – except it was nearly dark by then. While he was doing that, the rest of us were down the other end of the field cutting up the fallen ash for more possible seating and reducing the canopy to chippings for a carpet to give the project an appropriate finishing touch.  I’ll be adding more pictures of the bench as it changes through the seasons, but in the meantime can report that it was a long, but very happy and satisfying day.

Deciding on the perfect spot

It needs to be right…

…and with everyone happy… 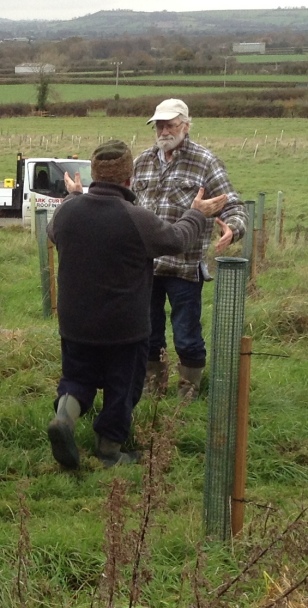 …time to greet a good friend.

Mark edges the digger up the path… 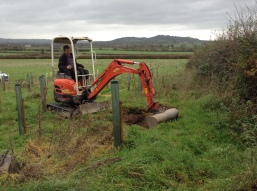 …and starts to remove topsoil

..and with the right bucket loaded, the work begins.

I sneaked a peek at the inscription…

..and wondered how many of these we’d need. 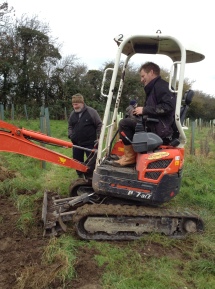 …and Mark actually looked quite cheerful

Before long it was time to unload the pieces 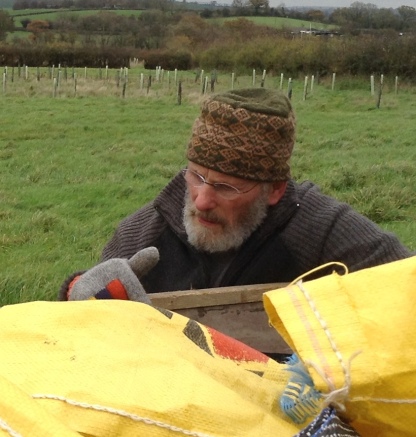 Nick gets on with it

…trying not to cover himself in bitumen

Skye pauses to look for her master…

…before joining Pebble in a mouse hunt. 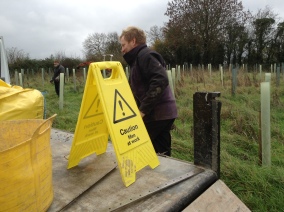 Just in case no-one had noticed

Is it really this big? 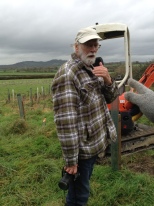 You looking at me?

..and waits while Mark gets the base slabs in place

Refreshments on the horizon 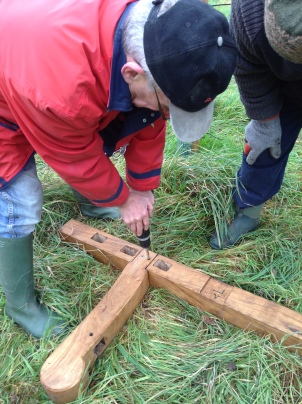 Would you trust this man to dig the hole in the right place?

Yet again Jo provides much needed refreshment – what a star.

Constructing the second side

…then the back goes on. A tense moment for Stewart as he’s never fully assembled it before……

Nick puts the pegs in 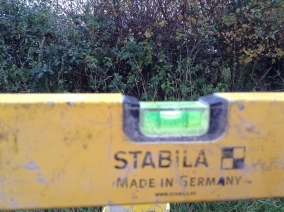 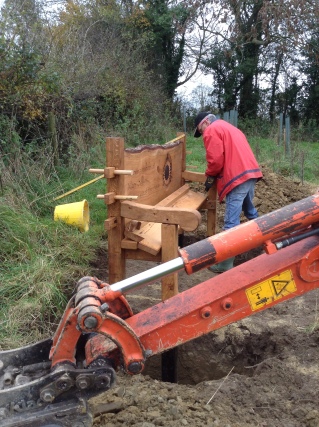 It needs to be perfect…

…and Gert tightens the final joints.

Considering how thick this branch was…

…this one was lucky…

…and so was this one. 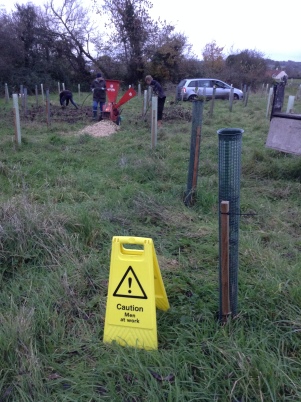 Meanwhile, at the bottom of the field, the chipper is working on the fallen tree…